The Havasupai Trail: Hell for Horses and Mules

Most tourists headed to the Havasupai Falls in the Grand Canyon go there to hike, explore, and take in the beauty of the area. But for years, they have been reporting the beating and suffering of horses and mules used for packing along the trail—some even collapsing and dying, including two just this summer. New PETA eyewitness footage shows that this is systemic abuse. Animals were seen being forced to carry heavy loads up and down steep trails—at as much as a 19-degree incline—in all weather extremes, sometimes slipping and even reportedly falling over the edge.

Suffering and Neglect off the Havasupai Trail

PETA eyewitnesses found horses and mules with sores and scars, while others limped or had overgrown hooves. Some were obviously underweight, including a young horse whose ribs were visible.

Many were confined to pens littered with trash, while others were tethered without any shelter. One horse on a 4-foot-long tether was apparently left without water on three consecutive days. 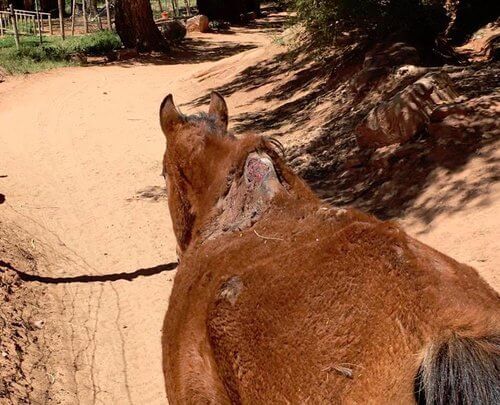 Wranglers forced the animals to carry heavy loads of tourist gear up and down a grueling 2,450-foot climb at an incline of up to 19 degrees. Sometimes loud music was played for the amusement of the wranglers, causing the animals even more distress. 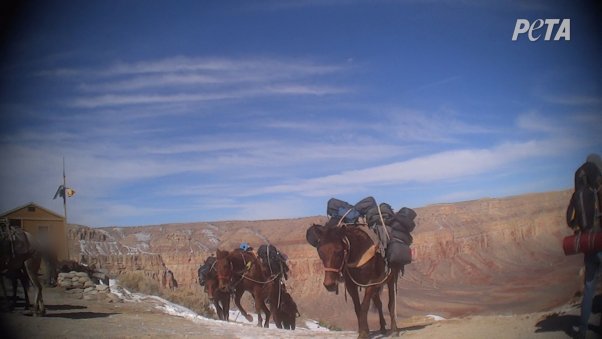 PETA eyewitnesses saw horses whipped and mules slipping on the icy, muddy trail, and many animals were left sweating and panting from the arduous journey. 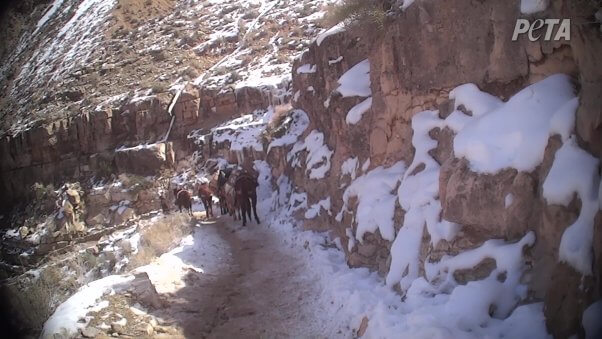 One wrangler even admitted that animals sometimes fall off the trail.

The Animal Suffering Is Systemic

Along with recent reports of animal suffering on the Havasupai trail, PETA’s footage shows that this is a systemic issue in need of immediate attention.

In May, an eyewitness reported seeing a young horse collapse and die after being forced to carry an oversized load while apparently suffering from heat exhaustion. Just weeks later, another hiker reported that a horse collapsed but was forced to continue the grueling trek anyway. Others were reported having scars and looking exhausted.

In August, a dead horse was simply discarded in the middle of the trail. We may never know what happened, what suffering she endured, and why her body was unceremoniously abandoned.

Travelers continue to share their horrifying experiences on TripAdvisor, echoing these concerns:

“I witnessed horrific cruelty and neglect of these Havasupai horses……..tied while overloaded with supplies and gear for several hours with no shelter or shade from the intense Arizona sun, no water, bloody burns and untreated wounds from abrasive ropes and pack lines.” —Kim C

“The animals are skinny, go without proper water and food all for your enjoyment. I didn’t know this until I was already hiking in the canyon. And this behavior has been going on for years, it’s absolutely horrible.” —Larissa023

“As much as I wanted to love it, witnessing what the poor pack animals were going through was awful, and all I could think of was the suffering and how I was supporting it by being there. It’s something you can’t forget and until something is done about this it’s truly not worth it.” —HeidiKS93

PETA is urging the Havasupai Tribe to take immediate action by developing a comprehensive plan to address the suffering, neglect, and deaths of horses and mules on the trail. You can help, too, by never using animals to pack gear when you visit the Havasupai Canyon.

The post The Havasupai Trail: Hell for Horses and Mules appeared first on PETA.

Meet Our Animals Who Help Special Needs Children In Ways That We, Humans, Struggle To